While he is choosing his cast Brian Tate studies the card of DRAKE, RUTH (who was beginning to feel forgotten). There is a part that would suit her, but it’s a fairly big one and it might be risky to try her out on an occasion like this. On the other hand, newcomers will always remain question-marks if we never gamble on them. After some hesitation Tate decides to book Miss Drake. She gets her second letter from West Region — enclosing a contract to take part in ‘M32′. 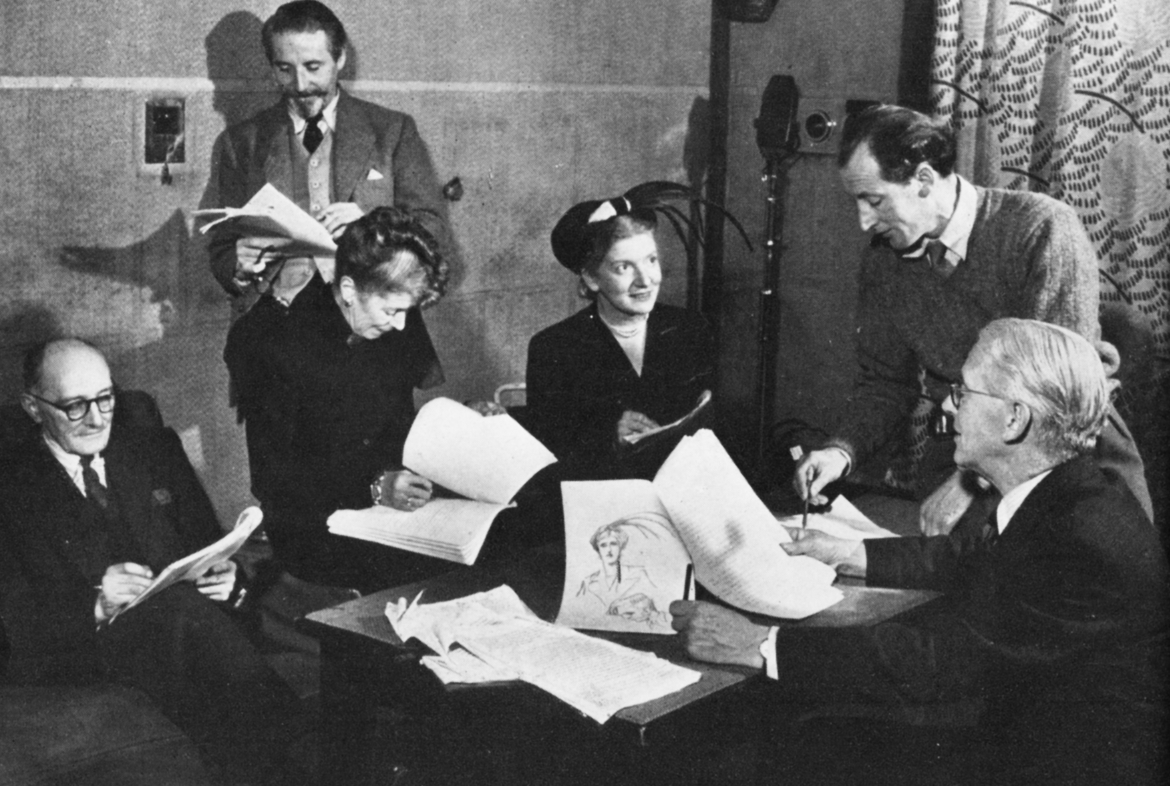 ‘THIS BIT WANTS PLENTY OF VOICE’ – Owen Reed talks over the script during rehearsal. Norman Kendall, Dorothy Holloway, Phyllis Smale pencil in a note. Leaning behind them Hedley Goodall studies his lines. George Holloway listens, and sketches in between times.

On the morning of the broadcast Ruth Drake enters Broadcasting House at 9.45 a.m. and the commissionaire directs her to Studio 2. Rehearsal is called for 10 a.m., and she has come determined not to be late. Other actors and actresses in the cast soon join her, and she begins to identify some of those she has often heard in West Region broadcasts — Phyllis Smale, bright, trim, golden-haired — the bearded, courteous, soft-voiced presence of Hedley Goodall — George Holloway, gravely humorous, with a modesty that belies his long experience of over six hundred broadcasts. 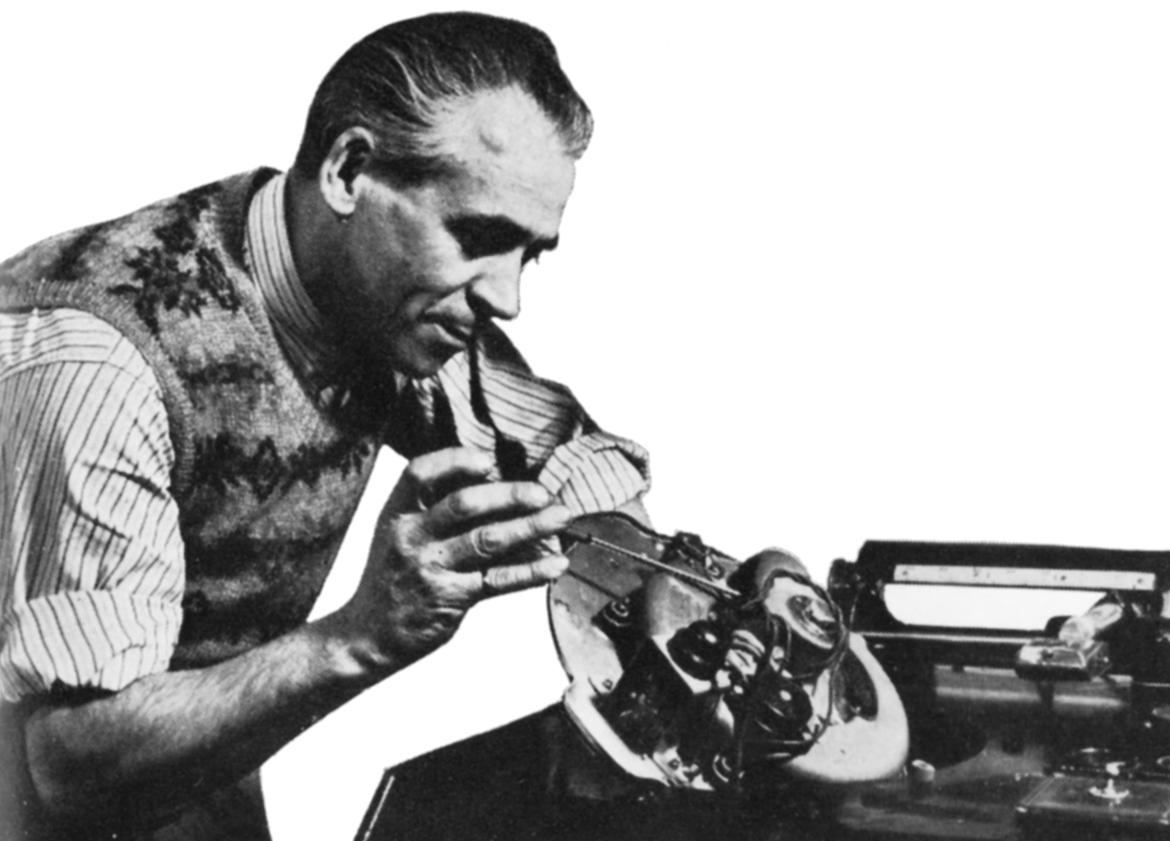 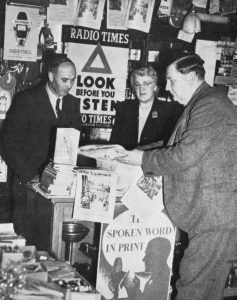 Rehearsal begins with a read-through. Minor errors in the script are corrected, occasional phrases are altered as the speaking of them shows a fault, and there is a lot of talk about studio positions and ‘flicks’. ‘On page three you’re out of doors, Ruth, so you’ll be in Studio 2 — and you wait for a “flick”.’ Studio 2 has a dead out-door acoustic, and a ‘flick’ is a green light on the studio wall which flashes as a cue for the next line to be spoken when it is not an immediate reply to another actor in the same studio. Any transition from music or effects disc to speech, or from one studio to another, is controlled by a flick because in such cases the actor will not usually be hearing what precedes his lines.

While the rehearsal proceeds Ruth looks through the double glass window into the control cubicle. There are three people there — the producer talking into a microphone which carries his voice to the loud-speaker in the studio; a ‘jeep’ (alias JPE, alias a Junior Programme Engineer who works the effects discs on the gram-bank; and a Programme Engineer who ‘mixes’ and controls the programme by means of a series of knobs. Each knob is linked with a microphone which it can bring into play. Labels over the knobs show that the engineer on this occasion is mixing two drama studios, an orchestral studio, a land-line to the M32 factory, and a second landline combined with radio-link to one of the Scilly Isles where a model of the rocket is being tested. The remaining knob — labelled GRAMS — brings in effects noises (in this case, factory sounds). A switch below the knobs controls the green cue-light in the studios; and a final controlling instrument with a needle indicator governs the volume of the total mixture of sound — the programme output — as it travels to the central Control-Room on its way to the transmitters. Delicate and sensitive work is the Programme Engineer’s. During the actual broadcast he — or she — is the nerve-centre of the whole show. A flick to the wrong studio, a twist of the wrong knob — and a smooth production is suddenly thrown into confusion. Nervy work, that needs both the temperament of the artist and the cool precision of the engineer. 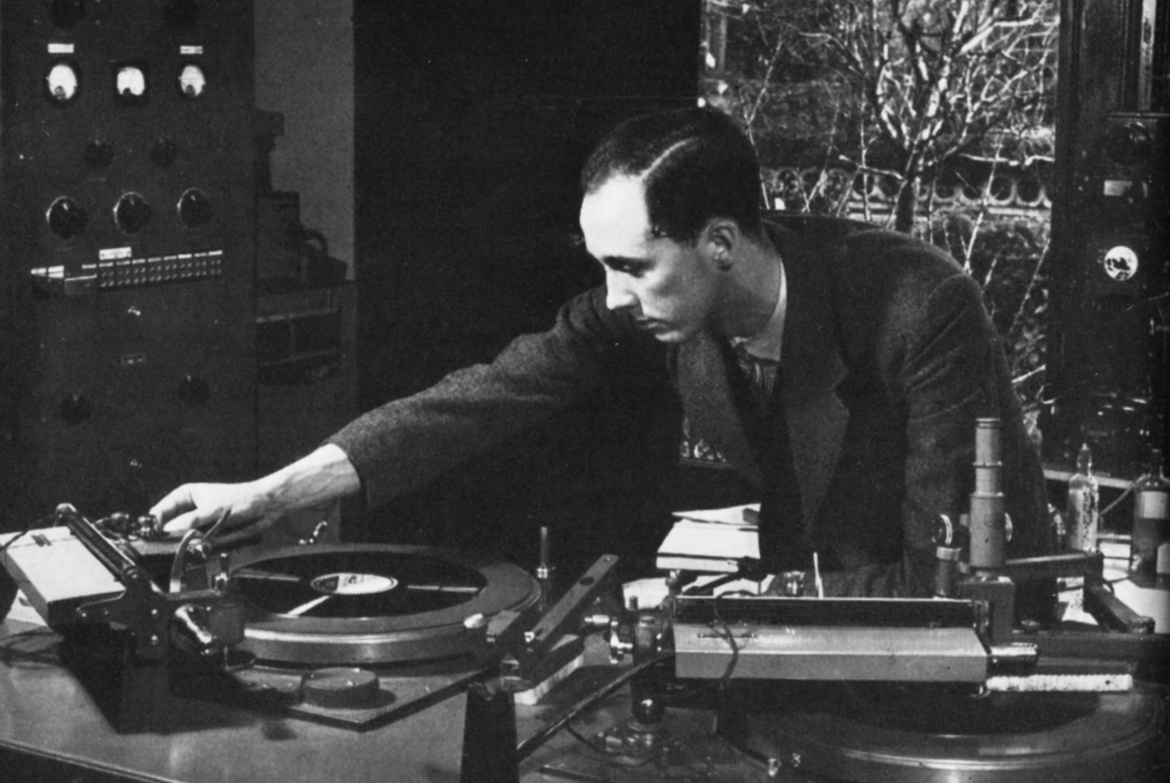 ‘THE PROGRAMME WAS RECORDED’ – But the fact shouldn’t be noticed. High quality reproduction is vital in broadcasting, and the recording engineers work to exacting standards. 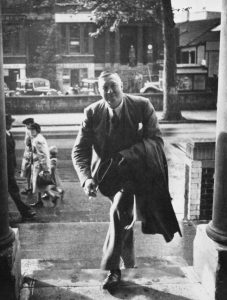 ‘FARMER’S GLORY’ – Arriving at Bristol’s Broadcasting House, the familiar figure of A. G. Street brings a Wiltshire voice and a love of argument to the microphone. Arthur Street is one of the outstanding personalities in West-country broadcasting.

Ruth Drake has plenty of time to look into the control-cubicle, while others are rehearsing parts of the programme in which she is not involved. And then it is her turn. ‘We’ll take page 8 now. Ruth, you’ll have to get through fairly quickly into studio 5 — you’re in 2 at the bottom of page 7, but you should have time because there’s a music section in between.’ She runs through her lines, with interruptions through the loudspeaker. ‘You’ll have to use more voice there, because you’re over music. We’ll get you some “cans” (headphones) after lunch, so you can hear what’s going on in the orchestra. You’ve got it all right otherwise, but it wants more punch.’ 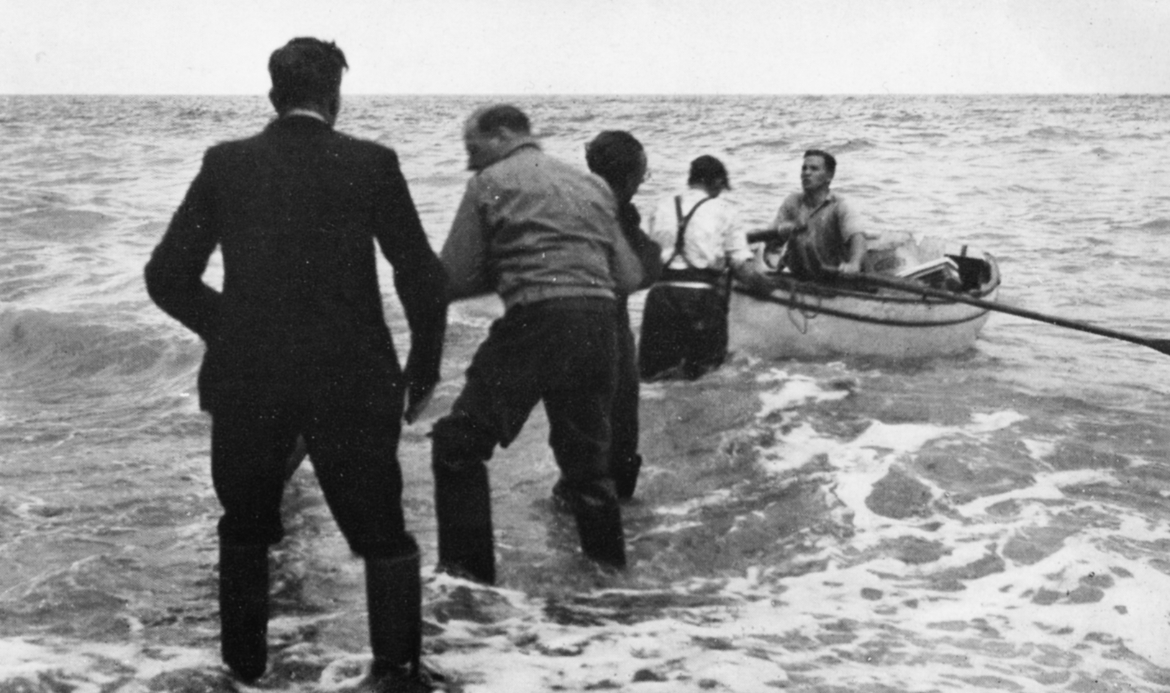 THE SHOW GOES ON – The rugged Lundy coast is often inhospitable. Frank Gillard lends a hand as the engineers hump their gear through the surf. One of the microphones has been drowned already, but the show will go on.

During the morning the orchestra has been rehearsing separately. After lunch the music sections are ready to be woven in with the speech. The atmosphere of the rehearsal becomes a little more tense, the programme begins to feel tidier. Over the ‘talk-back’ the producer’s voice comes up on the loudspeakers in studios 2, 5, and 1, talking first to Reginald Redman who is conducting the orchestra — ‘O.K. then, Rex, let’s take music section A. Hedley’s been doing that speech in 42-43 seconds, so you should have no need to hang it out. He’ll be finished where the strings swell up. Are you with us studio 5? And 2? Stand by for a flick — half-way down page 2. Flick coming.’ Gradually the orchestra takes its place in the pattern, and then there is a break while the outside lines are tested. The M32 factory comes through at once on the turning of a knob but there is a hitch on the line to the Scillies. Ruth sits down and relaxes. George Holloway sits quietly making pencil sketches on his script. The talk-back voice drones on. ‘Hello Nicky. Hello Nicky. Hello Scillies. Bristol here. Bristol here. Come in please, Bristol calling you.’ 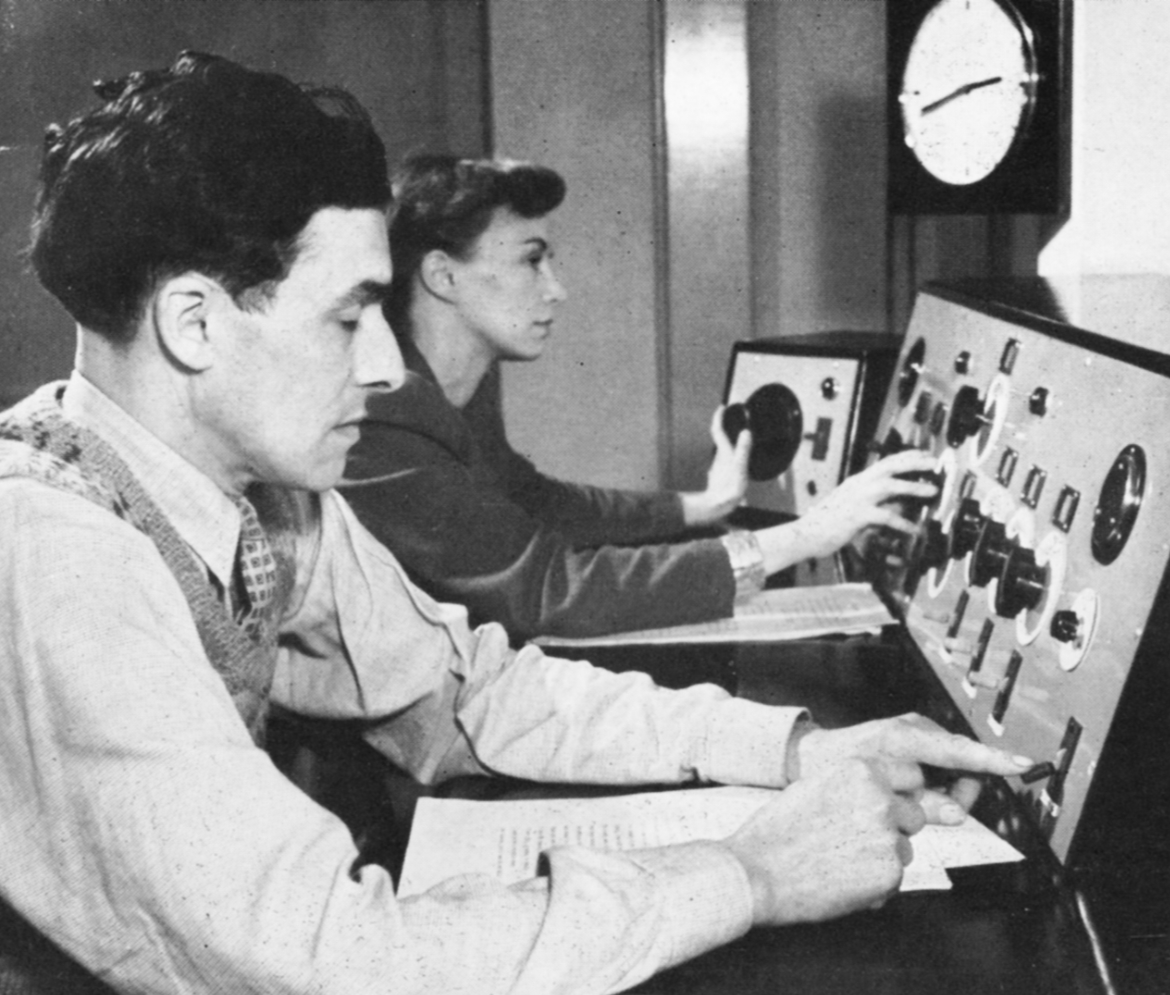 ‘DELICATE AND SENSITIVE WORK’ – Programme Engineer, Joan Vaughan, mixes and controls the varied ingredients of the broadcast. Actors, orchestra, recordings, and outside microphone respond to the touch of her fingers and blend together. Beside her Desmond Hawkins directs the rehearsal.

At length there is a reply, followed by an exchange of comments on technical quality. ‘We’re hearing you O.K. but apparently you weren’t getting us. Roy says our signal was pretty lousy this morning at his end, but it’s improving all the time, and it will be O.K. on the show.’ The producer now settles the time for his final run-through — radio’s equivalent of a dress-rehearsal. ‘A short break for tea now, and we’ll run through at five o’clock.’ 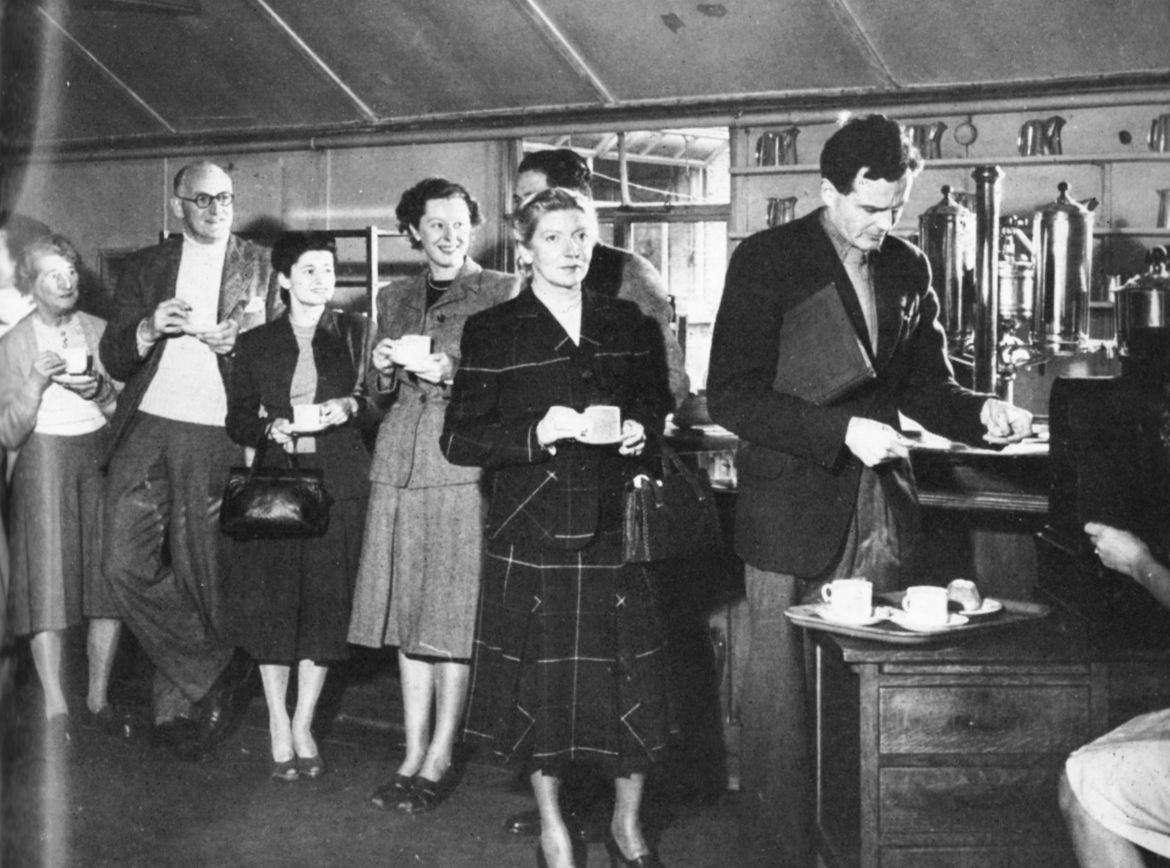 THE LUSCOMBES BREAK FOR TEA – A welcome interlude during rehearsal. In the Bristol canteen Brandon Acton-Bond heads the queue at the cash-desk. Following him are Phyllis Smale (with Michael Holloway behind her) Peggy Ryalls, Pat Roberts, Lewis Gedge, Nell Oxley, and Sally Lahee.