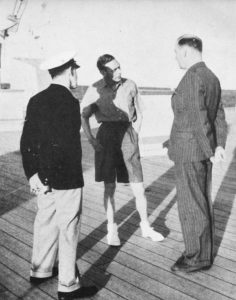 AN INFORMAL INTERLUDE IN A ROYAL TOUR – West Regions’ Programme Head, Frank Gillard, with His Majesty on board H.M.S. VANGUARD during the visit to South Africa.

Outside recordings, like films, are cut and edited before they are ready for performance. That is the producer’s job. In the case of a news-magazine like The Week in the West there may be forty or fifty minutes of recordings to be selected and condensed into a quarter of an hour’s broadcast. The first step is to play back the whole batch of recordings and discard those which are unsatisfactory, either on technical grounds or because the material or the speakers are not good enough. From the remainder the producer chooses anything outstanding and begins to plan the general layout of his programme. ‘We’ll lead off with the Sherborne item — it’s a strong one. The launching ceremony must go in for its news value. And as those two are both pretty heavy I’m inclined to tie it off with Johnnie’s bit — it’s light and amusing and good radio’.

Now it’s a case of arithmetic and ‘mark-ing-up’. Fifty seconds of the first disc, starting where the Mayor says ‘Today it gives me great pleasure’, and coming out on applause. The programme engineer marks the grooves of the record at the appropriate spots with a soft yellow pencil. One minute five seconds of disc two. Nineteen seconds of disc three and a quick change-over to the beginning of disc four. And so on, totalling up the minutes and seconds, allowing for Pat Beech’s linking material between the records, allowing too for the opening and closing announcements. 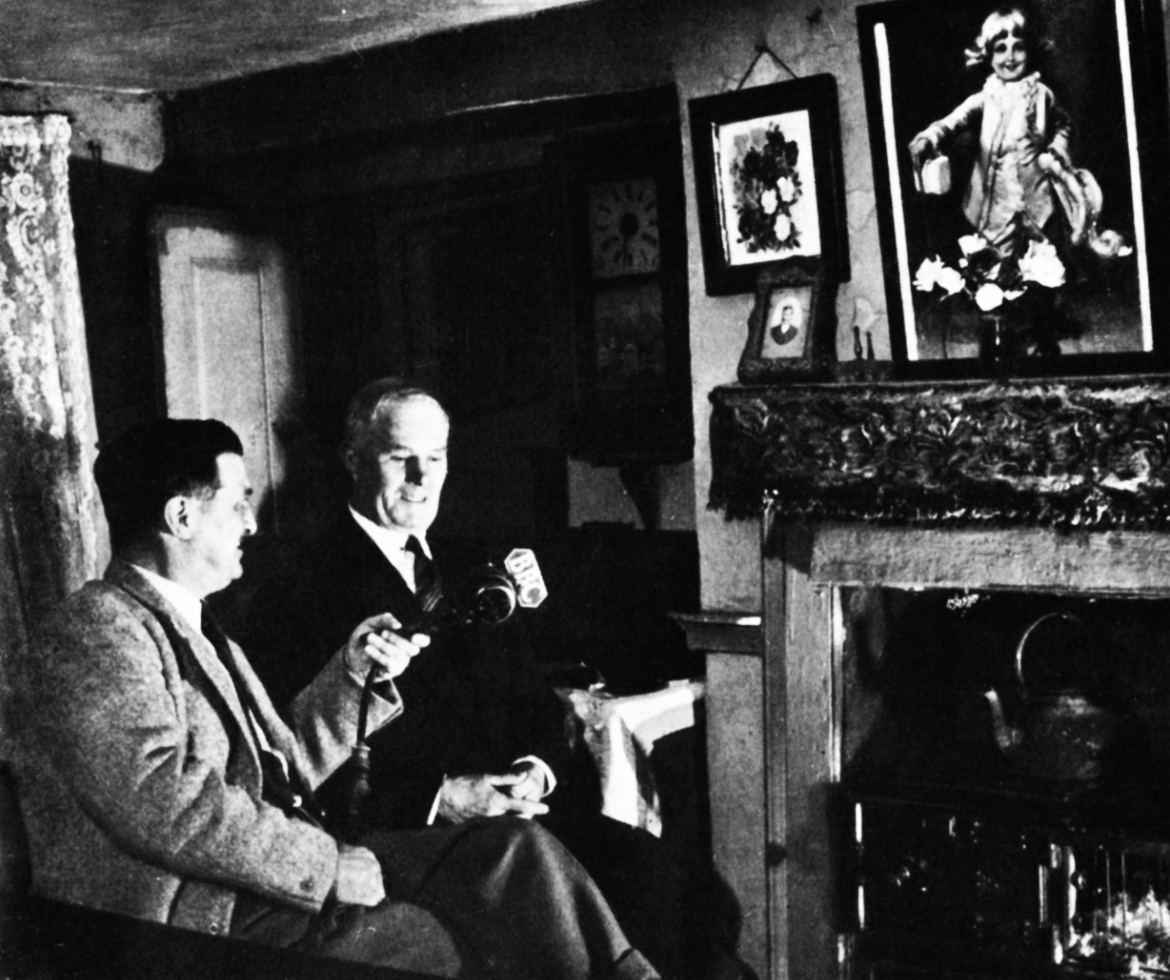 ‘COTTAGE ON THE AIR’ – At Bincombe in Dorest Bernard Fishwick takes the microphone to a west-country fireside.

The first rough count will show a surplus — perhaps several minutes too long. The process of cutting now becomes more severe and good material is thinned out to make room for something better. Items are reduced by taking out one speaker whose remarks don’t add very much to what someone else is saying. And then there’s the Mayor — ‘he’s good, but I wish we could get twenty seconds out of him’. The programme engineer plays over the Mayor’s disc again, listening for a chance to come in at a later point. ‘Look, we could skip the opening and come in where he says “This is a milestone”.’

Agreed. That will save eighteen seconds. The engineer makes a fresh mark on the disc and makes a note to ignore the previous one. ‘Disc One. Start at mark two.’ 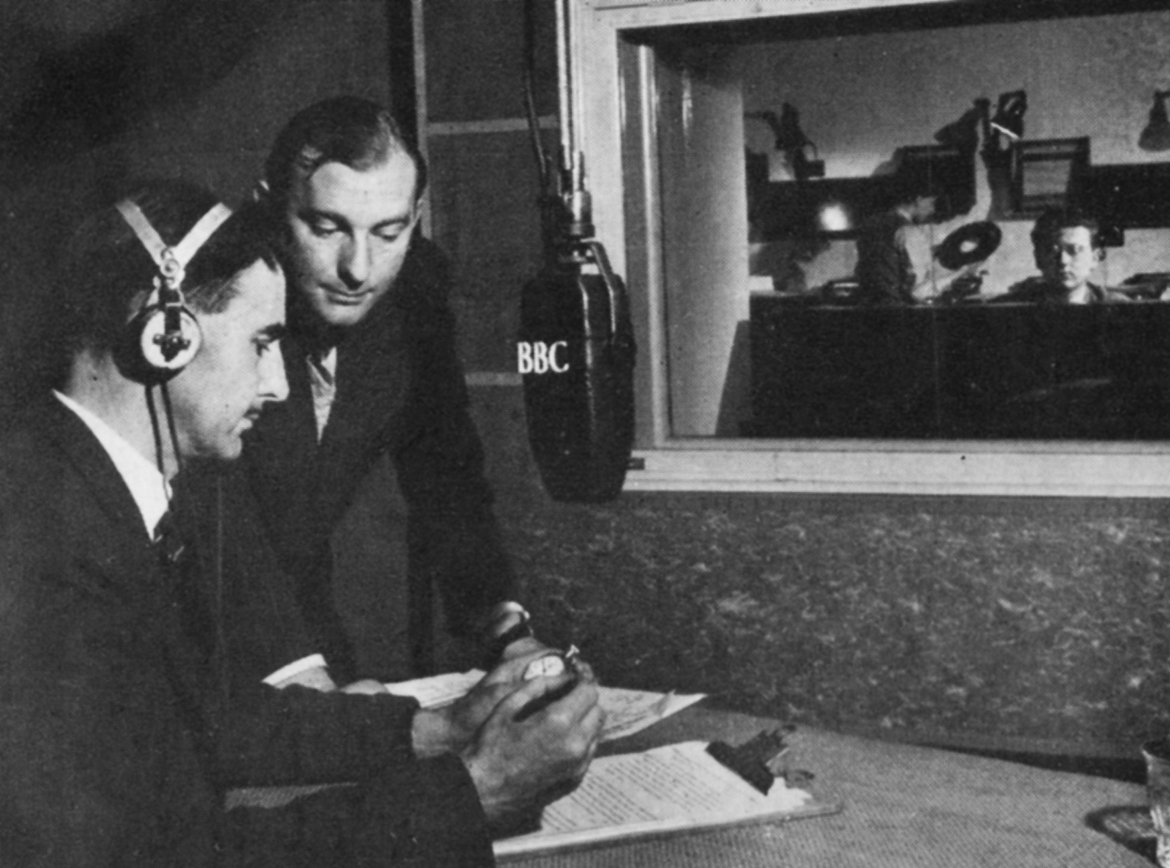 ‘TWENTY-THREE SECONDS OVER-RUN’ – ‘The Week in the West’ is still a shade too long. Pat Beech studies the stop-watch while editor Peter Maggs considers what to cut out.

Gradually the chosen excerpts from the week’s recordings are trimmed down to the vital core. Peter Maggs has written the linking sentences which will carry the listener’s attention tidily from one recording to the next. The cue-sheet is prepared, so that the engineer at the ‘gram-bank’ (a series of gramophone turntables) knows the running order and the opening and closing words which should come up when the needle strikes his yellow pencil marks. Because of quick change-overs from one disc to the next he is working on a ‘gram-bank’ with six turntables. Listening to his disc through headphones he can work ahead, setting up each disc in advance with the pick-up needle poised over the precise marked spot. As he hears the cue-line from the studio (‘After the unveiling the Mayor said—’) he brings down the needle, turns the knob which opens the gram ‘channel’ and hears the Mayor take up the story calmly with what was originally his third sentence. ‘It is a milestone. . . .’ 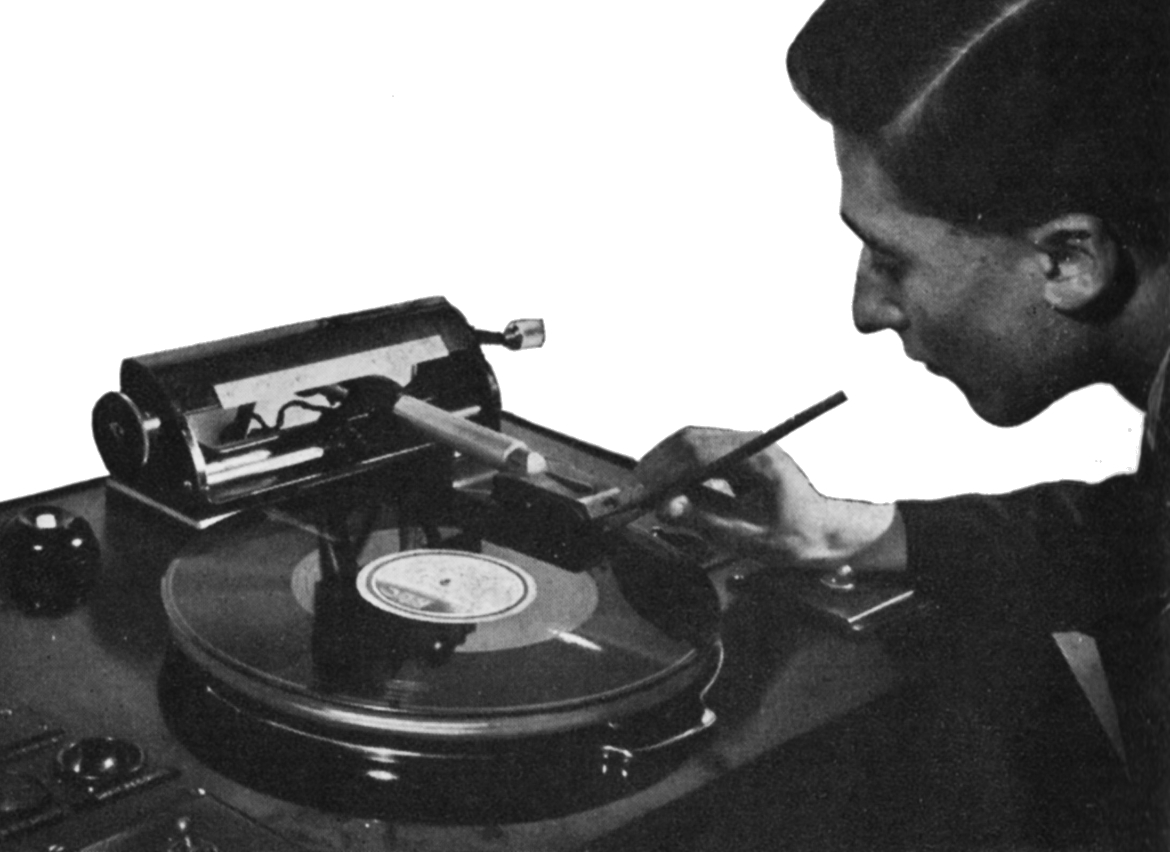 The programme is now nearly ready. A final complete run-through checks the overall timing and the smoothness of continuity from one item to the next. Pat Beech keeps glancing anxiously at his stop-watch during that last run and Peter Maggs decides to cut twelve more seconds to be on the safe side. ‘There must be a loose sentence somewhere, and anyway the discs could come in quicker in some places.’ Some slight adjustments of this sort are made, and one more edition of The Week in the West is ready to go out. An illustrated record of some of the week’s events. Fifteen minutes of broadcasting. Behind it many hours of preparation, travelling, recording, rehearsing.